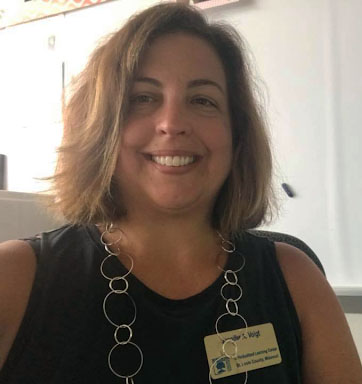 Voigt, one of six educators in the country to receive the honor, won the award for her work as a teacher in the Rockwood Individualized Learning Center (ILC) program.

“To be nominated for this award was such an honor, but to win it was a complete shock,” Voigt said. “It goes without saying that the other individuals who were awarded this honor are gifted educators, and I am extremely humbled to be one of the six that were nationally recognized.”

The award recognizes educators who display exemplary performance to ensure whole-child literacy and learning in a multitude of settings for students who are challenged with reading deficits in general and special education.

“My work at the ILC and collaboration with special educator Kathy Loesche and former coordinator Ayo Alfred allowed me to use the Learning Ally platform to engage many readers,” Voigt said.

Voigt instilled the joy of reading in her students by getting to know them on a personal level and their feelings about school in general.

“While working at the ILC, much of our time was spent on figuring out students' relationships with family, friends and school,” she shared. “Once that was determined, it was imperative to translate that to their learning. How I tied this to books was critical to their success as a reader.”

Once that rapport was established, she and her students began choosing books that reflected them and what was happening in their lives.

“Finding that ‘just right’ book can take a few tries,” Voigt said. “Many books we discovered together took students down a path that helped them in their personal lives as well.”

“I plan on using that money, over time, to rebuild a classroom that is targeted toward middle schoolers and their needs,” Voigt said.

Learning Ally is a nonprofit education organization dedicated to equipping educators with solutions that help learners reach their potential.

Learn more about Voigt through this video link.